At the beginning of your lacrosse career, the common shooting technique you will learn is the overhand shot. It’s beginner-friendly that gets you inside the door of shooting in lacrosse. Yet as your skills continue to develop and grow, an overhand shot will fall short from time to time. For this reason, there are in fact many different types of lacrosse shots that advanced players utilize in different circumstances.

So if you want to become a commanding offensive player on your team, learning other popular and effective lacrosse shots is a must. In this post, I will walk you through some of the best lacrosse shots you often see college and professional players do. Spoiler Alert: there will be six of them. After that, I will also go over how you should set up your shooting drills to practice these shots.

Without further ado, let’s jump in.

Looking for the best attack lacrosse heads in 2022?

Here are the six best lacrosse shots you can learn today to immediately expand your shooting arsenal. Once you think you have a basic grasp of the idea, time to hit the field and do some in-person drills.

Behind the Back Shot

A lot of the times attackmen don’t have opportunities to get open in front to shoot a nice overhand, notwithstanding the fact that defenders are constantly pushing attackmen to the alley. This is when behind the back shot or BTB shooting could come in handy.

When you are faced with no front angle such as near goal line extended, instead of forcing a low probability front shot, it’s smarter to utilize a behind the back shot that is often wide open. Engage your shoulders while snapping your wrist to release the ball behind you.

Watch this clip below to get a walk-through of the BTB shot.

In the beginning, your shots will feel weak and out of the target, that’s totally normal. After all, BTB shot is completely opposite of what you have been doing thus far, so take some time to get comfortable using your shoulders and wrists to control the shot.

As the name suggests, an elevator shot describes the trajectory of the ball traveling low from the starting position to high on the net. Elevator shots are really powerful in that it’s hard for the goalie to judge accurately where the ball is going. Given it also travels at a fast speed, the goalie will not have time to react before it already went inside the goal.

This shot involves shooting underhand or with a low sidearm so that you push the ball upward which eventually hits the top of the net. When receiving a low pass from a teammate, to save time, you should utilize an elevator shot especially when there’s a tiny window of shooting in the open.

Back when I was playing college lacrosse, jump shots were some of my favorite shoots. It’s maybe because I also play basketball in my spare time, and a lacrosse jump shot uses very similar footwork. So essentially a jump shot is a version of shooting on the run.

You will plant the foot that’s opposite of your dominant hand, turn your hip and make an overhand shot. Jump shots allow you to jump up and shoot over a defender, so if your defender is shorter than you, you could utilize this height advantage to deliver a jump shot.

Off-hand shooting is one of the things that really differentiate a great attacker from a good attacker. As you probably already figured out, off-hand shooting means shooting with your non-dominant hand. When you don’t have the ability to go both right and left, it’s easy for the defender to drive you away from the goal.

I have written a post specifically on off-hand as it’s a very important skill to acquire. Before you dive straight into off-hand shooting, I suggest you start with playing wall ball using your off-hand. It will be a progression from passing to shooting.

The last two advanced types of lacrosse shots are very useful and powerful so make sure to take some time to work on your sidearm shots. In a sidearm shot, you move your arms side to side when shooting on the net. Sidearm shots typically generate more power whereas overhand shots result in more accuracy. In addition, sidearm shots travel horizontally on the same plane of motion rather than up and down.

You can visualize it as you are swinging a baseball bat. Sidearm shots are difficult to get a grasp on especially in the beginning since the ball releases at a different point compared to overhand. Watch this clip below to learn the key technical points and then practice, practice, practice.

Sidearm shot is usually utilized when shooting a bar down shot. For more advanced players, head to this post to learn and get a good understanding of the most impressive and challenging shots to make, bar down shots.

At the beginning of your learning process, it’s best to wall ball using the underhand technique first. As soon as you get comfortable with the wall ball, move on to use underhand to shoot. This is a great technique walkthrough of how you should perform underhand shots.

How to set up your shooting practice

A great way to practice these shots is to put an object between you and the portable lacrosse goal. This object will act as the opposing defender who is in front of you. You can use cones or a large object.

Make sure when you start the shooting drill, your view is blocked by the object. Start moving sideways until you can see the net. Find a spot on the net and then stop moving. This is the spot you would want to hit so you want to use the face of your stick to point at where the ball should go. Find different spots on the net to practice shooting and improving your accuracy.

If you want to make this harder, you could also try to shoot without seeing the net. As in real game situations, a lot of the time, your view is blocked while attempting to make a shot. So this is where this exercise will be very useful.

No time to waste. After reading this post, it’s time to pick up your stick and go out there to shoot some goals. Repetition is the name of the game. If you strive to be in the top percentile attacker, start implementing these shots in your toolbox. 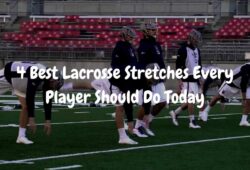 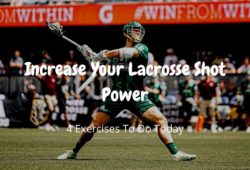