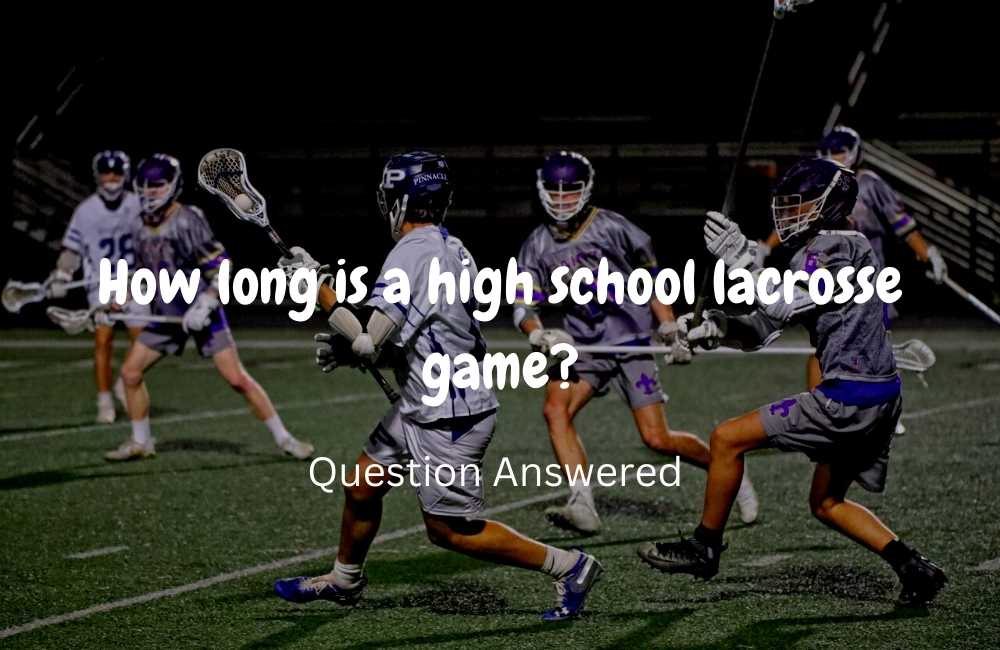 Like any other sport, the game of lacrosse has its own rules and regulations. One common question for beginner lacrosse players in high school is, “How long is a high school lacrosse game?”

Well, the answer to this question may surprise you. If you’re expecting a short answer, you’re in for a long one. In short, a high school lacrosse game can last anywhere from 60 to 90 minutes. But, of course, there’s more to it than that. In this post, you will learn the detailed breakdown of the game timing rules for high school lacrosse.

New to lacrosse? Find the best lacrosse sticks for beginners

How long is a high school lacrosse game (men’s vs. women’s)

5.  Lacrosse games are divided into four quarters, with each quarter lasting 15 minutes. There is a halftime break after the second quarter, which lasts for 10 minutes.

6.  If the score is tied at the end of regulation time, the game will go into overtime. Overtime periods are five minutes long and are played until one team scores.

Read also: When should you start playing lacrosse?

How many quarters in a high school lacrosse game

The length of a high school lacrosse game is determined by a number of factors, including the age of the players, the level of play, and the specific league or tournament rules. For example, in games played by younger players (under 14 years old), the halves are shorter (20 minutes each), and there are more breaks in play.

At the high school level, varsity games typically consist of four 12-minute quarters, while junior varsity and freshman games have two 22-minute halves. If a team is ahead by 10 or more goals at any point in the second half, the clock will run continuously until the end of the game (this is called “running time”).

There are also different rules for tournament play. Sometimes, the game length is shortened to two 20-minute halves or four 10-minute quarters. These variations are typically used to fit more games into a single day.

One important thing to remember is that the clock does not stop during play in lacrosse. This is unlike basketball or football, where the clock stops after every play. The only time the clock stops in lacrosse is for timeouts, injuries, or penalties. As a result, games can sometimes end up being shorter or longer than advertised.

Things that affect the duration of a high school lacrosse game

There are many things that can affect the duration of a lacrosse high school game. Some reasons are:

The number of players on each team

If one team has more players than the other, there will be more substitutions and longer breaks between plays.

The players’ skill level can affect the game duration. The game will end in shot duration if the players are skilled and playing well. However, if there are a lot of turnovers or players are not skilled, the game will move more slowly.

The level of competition

A closely contested game will likely last longer than a game where one team is significantly outperforming the other.

So, there you have it!

That’s a wrap! We hope you know the answer to “how long is a high school lacrosse game?”. If you have any other questions about the lacrosse sport, feel free to leave them in the comments below!

In the meantime, check out our other blog posts for more interesting content on all things lacrosse-related.