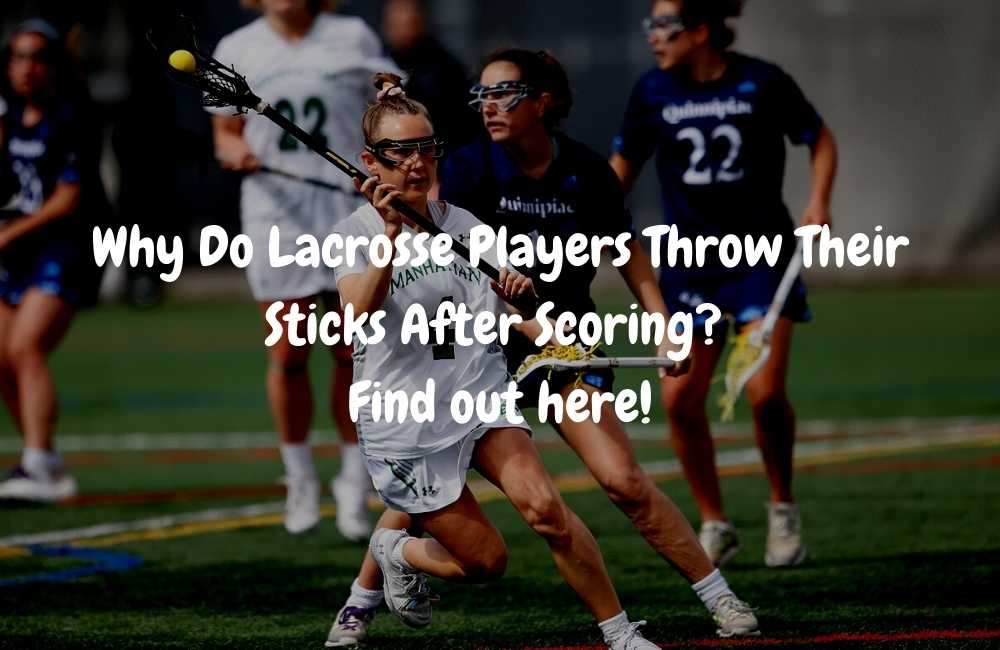 It’s an exciting moment when a lacrosse player scores a goal, and they often celebrate by throwing their stick in the air. But have you ever wondered why they do that? It turns out there is a reason behind this tradition and behavior! After scoring, players quickly throw their sticks so the referees may ensure that the stick is compliant with the rules. A stick check happens based on the referee’s judgment or the opposing coach’s request.

Now you understand the gist of it but there are also a few nuances you need to know. So in this post, you will learn everything you need to know about why do lacrosse players throw their sticks!

Why do women’s lacrosse players throw their sticks after scoring?

This tradition mostly exists in the women’s lacrosse as you’ve probably seen it done multiple times during collegiate lacrosse games on TV. Women’s lacrosse players throw their sticks after scoring as a safety precaution since it might be considered illegal by an opposing coach if they have doubts about its legality of the sticks (too deep a pocket, too many strings, etc.).

The scoring player may not touch her cross’s strings until the goal happens and must immediately drop her stick. If a coach makes a stick check after a goal, the official will inspect the pocket of the scorer’s crosse for illicit objects. If the check is denied because the stick is still there, it indicates that two minutes have elapsed; if it isn’t, the play continues (end).

This rule prevents the players from using illegal sticks that might come apart and hurt another player. Also, the other team gets a complimentary shot at the ball if the player doesn’t drop her stick within two minutes.

Check out the best women’s lacrosse sticks in 2022 here.

In other words, to eliminate any suspicion and concern, players choose to drop their sticks immediately to avoid tampering. Because if the opposite team or the referee discovers illegal temperament, the player will have to change her stick, and the goal will be scratched.

Among many things, this is one of the differences once again between the men’s and women’s games, stick dropping. In lacrosse, the stick is everything. This simple piece of equipment can make or break a game – which is why the rules surrounding sticks are more complex and full of nuances.

Read also: How to win a draw in women’s lacrosse

These key differences exist because women’s lacrosse is a non-contact sport and the pocket needs to stay much shallower, so women’s lacrosse has stricter rules and is much more careful and weary of illegal temperament with the stick and pocket.

So there you have it! Now you know why women lacrosse players have to throw their sticks. Next time when you watch a game, you will understand why the player has to drop her stick and even start to enjoy this as a unique aspect of women’s lacrosse.

How can you check if the stick is legal or not?

For all beginners, this is a very important knowledge to learn. If you aren’t sure of your stick, ask any advanced players on the team for help. A seasoned lacrosse player can tell if a lacrosse stick is illegal by simply inspecting it. Attacking and midfield sticks should be no less than 40 inches long, although they might be as long as 42 inches.

While the goalkeeping lacrosse sticks generally have a length of 40 inches, except for those used by goalies who can go as long as 72 inches. On the other hand, defenders’ lacrosse sticks start at 52 inches and have a maximum length of 72 inches. They are considerably shorter than offensive players’ sticks (60-76″).

The lacrosse must be the correct size, ranging from 6.5 inches at the top to 3 inches near the base (assuming you’re purchasing one with the actual net). The head of the stick, including as well as the net and strings that make it up, is also crucial to pay attention to.

Your ball should not drop below the head of your lacrosse stick’s sidewall. You should also avoid having extra shooting strings or dangling ones from your net.

Furthermore, the bottom of the lacrosse stick must be covered in rubber or plastic instead of being exposed. This is to assure the safety of other players, the referee, and spectators during play.

Now that we know why lacrosse players throw their sticks after scoring, let’s take a moment to actually appreciate the art of dropping the lacrosse stick. (I quite enjoy watching it myself!)

The Art of Stick Dropping

Although lacrosse players are required to throw their stick after scoring because of checking the stick and legitness of the goal, it has now become a trend too and many players drop their lacrosse stick in quite a unique and fashioned manner.

There are many different ways to drop your stick. Some players prefer to do a flip, while others simply toss it into the air.

Here are a few tips mainly every lacrosse player considers while dropping their stick.

Stick-dropping is an art form that takes years of practice to perfect. There are many things to consider when dropping your stick, such as stance, timing, and aim. So although it might seem like an easy thing to pull off, doing it well does require creativity and practice! There’s even a podcast called “stick drop“!